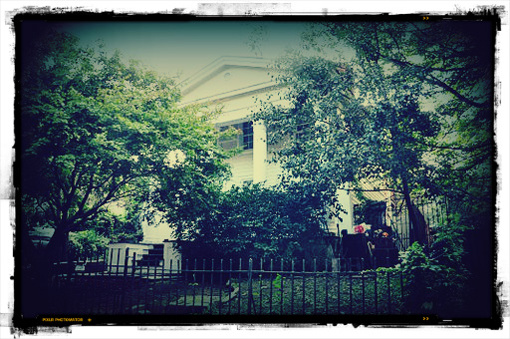 This is an interesting poltergeist case that involved a brick being thrown through the window while the home was surrounded by police.

Located at 136 Clinton Avenue in Brooklyn, NYC, this Christmas haunting occurred during the Victorian era in 1878. The source of the reports can be traced back to a New York Times article published December 20, 1878. Kudos goes out to Nick Carr, a movie location scout in NYC, who came across this gem in the archives.

The headline for the article read:

“Door-bells rung, doors rattled, and a brick thrown through a window — a vain search for small boys”

The bit about searching for small boys doesn’t surprise me. Victorian era ghost hunting often entailed the search for “small boys” to rule out trickery. Even the great ghost hunter, Harry Price, made note of it.

During the time of the incidents, the house was owned by a gentleman named Edward F. Smith.

One evening, Mr. Smith heard his doorbell ring. He got up to answer the door, but nobody was there.

He returned to the sitting room, and the doorbell rang again. Just as the first time, no one was at the door.

This carried on throughout the evening, accompanied by the sounds of rattling, banging, and kicking from the two rear doors, which were said to have occurred “with great vigor”.

He concluded that the incidents were likely caused by wind, and he retired for the night.

The next evening, the rappings and doorbell ringing returned. They continued to plague the home every evening for two to three weeks.

“A watch was placed at each door and a guard placed in the yard. It was of no use, for the doors rattled and pounded just as violently, and the bell rang with all its accustomed loudness.”

Mr. Smith sprinkled flour and ashes along the approach to the front door in hopes of tracking the intruder’s footprints. But, alas, the doorbell was rung and no footprints were discovered.

Wanting to put an end to the unearthly harassment, he contacted local police.

On the eve of Monday, December 16, 1878, Captain McLaughlin and Detective Prieo of Brooklyn’s Fourth Precinct paid a visit to the house with the goal of discovering the source of the ghostly shenanigans.

Almost immediately upon arriving, the officers were greeted with the hellish pounding and bell ringing that claimed the home as its own. This carried on until 10:00 p.m. that evening.

Unable to determine the cause, or make any arrests, the police left and returned the following evening. However, once again, no cause was found and the talented spook was free to continue its eerie rappings and otherworldly bell ringing.

The next evening, on Wednesday, December 18, the police Captain stationed officers around the perimeter of the damned house, while he and the detective stood inside the house by the door. With everybody in position, they waited.

“In a moment or two the bell rang violently and several heavy blows were struck upon the door in quick succession.”

This was quickly followed by a large brick smashing through the dining-room window.

Although the house was surrounded by the keen eyes of police officers on alert, no culprit was seen.

Word of the haunted house spread quickly. Hundreds of people were found standing outside of the home when the New York Times reporter arrived on the Friday evening.

The reporter dodged his way through the crowd and knocked on the front door.

A boarder at the house, Mr. R. B. Thomas, answered the door and informed the reporter that Mr. Smith was “prostrated with nervousness” and could not be interviewed.

The boarder also told the reporter that Mr. Smith was

“inclined to lay it all to some evil spirit which had a grudge against some occupant of the house.”

If you have experienced any activity at this building, or at any other location anywhere else in the world, please tell us about it here

Michelle McKay is a Canadian paranormal investigator of 20+ years. Former TV host: Destination America, Discovery, A&E. Founder of ColdSpot.org. Her great-uncle was pioneer UFO investigator Henry McKay. This may all sound glamorous but in reality she spends her life holding a flashlight and talks to a lot of people. Foremost, she is willing to work for tacos and chocolate.

The following report was sent into our website by Robert on Feb 6, 2014:

“We rolled up to a secluded cemetery in a backwoods road around 7 P.M. The paranormal group I was with, The Adirondack Society for Paranormal Research, was trying out new members, and we’d always heard about a cemetery where a family had been murdered by an enraged father. Needless to say, we didn’t find it, but we did come across one that was rather quaint.

It was boxed in by trees on four sides. There was a considerable distance between the open drive and the grave stones. There was nothing but green grass for two hundred feet before the green met the gray of stone. Stones were arranged in lines that went on for about a football fields length.

When we got out of our group leader’s red Pontiac Sunfire, something felt different. We pulled out our equipment, turned it on, and immediately we started to get spikes on our EMF detectors. The readings dissipated before long, and we set out in groups of two and three to investigate the grounds.

Two hours into the investigation, we had nothing. False positives revealed themselves in cooling gravestones left over from the day; that left temperature reading devices out. EMF scans and EVP sessions revealed nothing all throughout the cemetery. But, every now and then, a group would return to the car.

The car always seemed to be bustling with spikes, so a group I was in with one other investigator went back to the car. We got out our meters, turned them on, and proceeded to follow a spirit around the car. The spirit walked continuously; when the readings would decline, we would move forward, and it would pick right back up again.

We followed for a good ten minutes before we decided on a spirit box session. I ran to the investigator who had it, notified him of the situation, and returned to the car. We turned it on and asked questions. “What is your name?” “Were you a veteran of war?” “How long have you been here?” “Do you know you’re dead?” Every time we got a response, though most of the time, we couldn’t make out what the spirit said. A voice recorder was placed nearby, and it captured the entire conversation.

We ended the spirit box session, packed up shortly after that, and went home. The next morning I reviewed the evidence. Aside from a few EVP’s in response to direct questions, the spirit box session was a little easier to make out. After a few playbacks, we learned that the spirit’s name was Jeff. That he was a veteran of WWII, and that he knew he was dead. We cataloged all the evidence, and marked it as some of our best since forming.

One question always kept us wondering, though: why was Jeff so interested in the car? He seemed to be infatuated with it to an extent, always walking around it.

About a month later, our group was taking part in an open house with the local chamber of commerce to get our name out there. The team later gave me a follow up on Jeff. It was revealed that a man named Jeff had hung himself in the vicinity of the cemetery, near the end of the road that lead past the cemetery. And the reason he was interested in our car, we learned, was because his daughter had the same and exact make and model.

I consider this to be the best case I’ve ever been a part of. It still gives me goose bumps just thinking about it. Not the creepy kind, but the kind that confirms what we do. That losing a corporeal form isn’t the end of all things. We endure, and we remain in many cases.”

The following report was sent into our website by Greg in Manhattan on April 3, 2012:

“Before I was born, my sister died. But every time her birthday comes around, it get’s windy and cold when you say her name. When ever you look at pictures, you look away and see her face. One day she will get revenge on the doctor that let her die!”