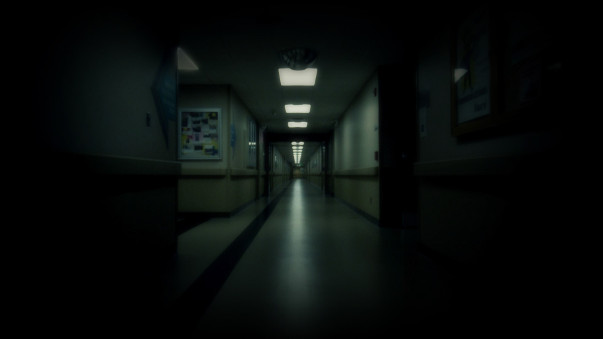 “As my memories of the best job I have ever had fade away with time, Hospital Security Agent, I feel it necessary to share one of my creepy experiences at the Medicine Hat Regional Hospital.

Please keep in mind that I am not an author nor have I ever wanted to be one. Only a select few have ever been told of this story.

All of my notebooks have long been destroyed, and I do not recall the exact time and date. This is written based on a memory of an incident that took place over two decades ago. Hope you enjoy!

Location Medicine Hat Regional Hospital, Level Five, Rehab Support Service Building West end. It was imperative, for the security of property and the safety of people, that this floor was checked thoroughly to prevent theft and from keeping transients from settling in one of the dark corners of the many empty rooms.

In this era, level Five RSS, as it was called, was basically a semi-abandoned floor used for secure storage and it had one room dedicated to Diabetes Education service. It was a poorly lit long stretch of hallway that was formerly nursing units 5 East and 5 West.

Prior to its abandonment, and after 5E and 5W had moved to their new location, Paediatrics had moved onto level 5W awaiting their turn to move to 4 North in the new addition. This floor was eventually totally demolished and rebuilt to its modern state.

Between the hours of, 00:00 and 06:00, in or around fall of the early to mid-1990’s, I was performing a routine patrol of level five of the Rehab Support Services section of the MHRH. I entered the floor from the far east entrance, a stairwell separating the old and new hospital.

The hall was dimly lit as I proceeded from east to west, checking every locked door and every nook and cranny. I reached the west side of the floor and I was checking each open room and entering the next through the connecting bathrooms.

I entered the last empty room, the northwest corner, via the bathroom door, and was shocked when, within my peripheral vision, I saw someone standing in the hallway just beyond the threshold.

I instantly felt all the effects of adrenaline as I realized a child was standing there looking at me!

It happened so fast! The child was there and then just… gone! I stood there dazed, my heart pounding, my hair standing on end and trying to rationalize what I had just seen.

I was convinced it was just fatigue that had caused a hallucination, however, at the time and for years after, I recalled details of this child as if I had seen them in a photograph.

I composed myself and re-checked the whole floor. I was almost positive the child was just a figment of my imagination, but the event seemed so real I had to be sure there was not a child running around the RSS building, however doubtful I was. I am positive I would have heard the child leave the floor through the stairwells or the elevator.

Of course, the search turned up nothing and I remember laughing at myself for being so foolish.

I continued my patrols as usual, but I could not get the sighting out of my mind. I even took a chance with my reputation and told the on-duty paediatric staff of my encounter. I asked if any children had passed away on the 5th floor prior to moving to 4N.

All staff that night assured me that no child had passed on that unit, they also had a good chuckle over it and I think they had a little joy mocking me. I was convinced at this point that it was, in fact, a full-blown hallucination.

This did not last too long, on a subsequent visit to 4N, a staff member was razzing me on the fact that I thought I saw a ghost and I was once again asked to tell my story to a more senior nurse.

This time I did not get the chuckles I was expecting, instead, she confirmed that one child had indeed passed away on 5W RSS. She had known this because she was on duty the same day the child passed.

I was sceptical so I convinced her to show me the room the child was assigned. I honestly did not believe her as she had been a bit of a jokester in the past, but I never revealed to anyone the actual room this happened in, so I was confident she would be exposed if not telling me the truth.

I escorted her to the old RSS level 5, while she told me a heartbreaking story leading up to the child’s passing. To my amazement, she lead me right to the room at the NW corner of level 5 RSS. The description she gave me matched the child I saw standing in the hallway outside of this same room.

I had only seen the child once, but I still have a strong memory of this incident. Of course, this is only one of the many strange things that happened within the walls and halls of the Medicine Hat Regional Hospital.”