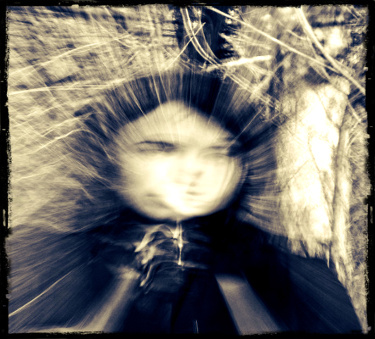 “To sum it all up it was a lodge, in particular from what my father had told me it was a loggers (floating) lodge at one point, but was found abandoned and half sunk so my father took that opportunity to restore it to its former glory but he never expected the extra visitors that came with it.

Eventually I got to the point where I no longer wanted to live in this lodge because I couldn’t stand the paranormal activity. So I pleaded and begged my dad if I could move in early with my boyfriend, despite the fact that our relationship was still very new. I was able to sway him to allow me to move in with my boyfriend and his parents just until we got a place of our own.

After I had moved out, my father began renting rooms out to tourists. It was at this point where my father realized that perhaps I wasn’t full of “shit” as he had called me and that maybe I was telling the truth.

The one room that many people had stayed in turned out to be the exact same room as mine that I had spent many years in.

The common complaint among the majority of the tourists was that someone would come into their room in the middle of the night, walk around their bed, and stand at the foot of the bed staring at them. They would hear the footsteps in the hallway slowly working their way up to their room and then they would feel the presence of someone come in. But most were too afraid to look and see who the intruder was, so naturally in the morning the tourists would confront my father in regards to see if he had intruded into their room at night.

At first my father laughed it off and responded that he would have no reason to do such things. But then after countless people complained of the exact same strange coincidence he started becoming a believer.

It wasn’t all cashed up to this one particular incident, this lodge is beyond terrifying. In fact a number of years back, perhaps around 2010, I moved back because my husband and I were going through difficult times and the lodge was a place that was always offered to anyone in the family who needed a place to stay as it did have roughly 15 rooms.

Even after 10 years of time, maybe even more, there was still a high amount of paranormal activity. My husband ended up staying in the lodge with me as well. When I had told him that the lodge was a little haunted and to not be afraid he seemed more of a skeptic, he laughed it off. But after staying in the lodge within 3 months, he had seen and felt enough to become a believer as well.

One instance happened when it was just him and myself alone in the lodge. It was early morning and my husband had decided to wake up and make a big breakfast for the two of us. The kitchen was huge to say the least, there were two entrances one that led from the hallway down to the rooms and had a staircase that would take you to the lower level, and also an entrance from the living room area.

I was in the process of getting dressed when I had heard Dave hollering from the kitchen, but I didn’t hear what he was saying so I just continued getting dressed. I heard him say a few more things but didn’t bother yelling back.

It turns out that while Dave was cooking breakfast he had seen me walk by him to the lower level and he assumed that I was going to have a shower. He asked me as I passed by if I was heading to have a shower and if I wanted him to come because he knew how freaked out and uncomfortable I was when I went to shower. He then asked again and called “Baby?” twice. No response, so he assumed that perhaps I was just ignoring him.

I finished getting dressed and I walked in from the stairway/hall entrance. He immediately asked me, “Did you have a good shower?” My response of course was No. He then proceeded to ask me if I had at least just come from downstairs, “Didn’t you just come from downstairs?” By this time he was really starting to wig me out and I confronted him by saying, “What are you talking about? I was just in the bedroom getting dressed? How could I possibly be in two places at once?” His face went so uncharacteristically pale that I knew something was up.

He explained to me later that he had seen a tall, young lady that looked very similar to me with long dark hair which is why he had assumed that it was just me. The tips of her hair had passed out of the corner of his eyes and the body had headed downstairs.

This was not the only strange incident when we stayed in that lodge. We often heard the phantom steps of someone walking the halls at night. Also our cat, she acted so strange during the night. She ran into one of the furthest rooms down the hall and hid under the bunk bed in a far corner and refused to come out. I literally had to go and fetch her myself, not a pleasant situation. I hated going into the rooms that were the furthest down the hall, they made me so uncomfortable and scared, the hairs on my neck always stood on end.

Not only that, I conducted a few experiments on my own. When my husband happened to be in town, as I did not like to see the end of the hallways and the other rooms, I put up a double mattress that would block the hallway to the other rooms. All throughout the day I was spooked. I heard noises and steps and so many noises I couldn’t find the source of.

I found enough courage in myself to speak directly to the spirits or spirit that was bothering me. At first I asked it to make a small knock on my door to let me know he was there. I did this experiment a few times. Each time I asked the spirit to knock a little louder, and every time there would be a knock.

At this point I thought it was incredible because I had never attempted to contact any of them and I thought that maybe I was losing my mind. So I asked them or it, whatever you want to refer to them as, to make a loud sound something very significant to show with force that they in fact were there.

Within minutes, the mattress that I had strategically placed to block out the hallway and the other rooms was pushed over with such force on my door that I thought that someone was trying to break down the door to my bedroom. I was extremely shaken from this, so I decided to stop and further meddling with this spirit might aggravate it.

Hours crawled by and I felt like I would be alone in the lodge forever. Finally my husband got home after me sending him multiple pleading texts for him to come back to the lodge because I was too afraid to stay by myself. He finally came home and he saw on my face that I was visibly shaken, and I was a blubbering lunatic trying to explain what had happened.

After a couple hours I had calmed down and had told him everything that happened and asked if he believed me despite the fact that he said that he did. I guess the spirit figured that wasn’t enough because the mattress that I had stood up again to block the hallway off was mysteriously pushed over again with enough force that it had my husband jumping off his feet ready to knock whoever out that was on the other side of the bedroom door.

He opened the door and sure enough the mattress was flat down in front of the door.

By now my husband was thoroughly convinced that the lodge was haunted. Even he couldn’t stand being in certain places alone in that lodge, particularly the downstairs bathroom and the cargo bay was hair raising.

On multiple accounts people have said that there was something strange about that lodge. My father himself and his girlfriend had heard eerie, old music coming from downstairs, as if played from an old record player. On closer inspection they couldn’t find a single thing downstairs that played music, let alone would sound like music.

I personally think that there are multiple spirits trapped in the lodge, and unfortunately some of them are just trouble makers but there is a fair share of very dark and unhappy spirits. There are places in this lodge such as the cargo bay or the downstairs bathroom, you can’t stay more than ten minutes in the area because you feel as if something really bad will happen to you and your skin just crawls. You feel as if you’re being watched in the bathroom and you shower so quick that its more or less a drip dry shower because you can’t stand staying any longer than necessary in the bathroom.

I was never able to find any research on this lodge. All I know was that at one point it was meant for loggers. When it was dug up it had extremely expensive logging equipment in the bottom of the lodge, the bilge. Of course all of this equipment was thrown out or had to be salvaged, most of it was water logged and covered in fine silt like mud. Months on end I would help my dad clean out the smudge and gunk to try and get it to float again which eventually it did. His intention was to sell it, but the sheer number of misfortunes and bad luck that surrounded it made me wonder.

In the end he was never able to sell it, nor was he able to make any money from it, as the upkeep of such a large lodge and not enough profit caused him to give up. He gave in throwing his hands up and stopped working on it. And I no longer know who the current owner of that particular lodge is, but the heartache and sheer frustration it caused my father was enough for him to want nothing more to do with it.

He still to this day won’t say for sure that he was certain it was haunted. But he did tell me that there was without a doubt something very unusual about that lodge. My father is a very skeptical man himself, even confronted with unexplained phenomenon he still refuses to believe what his own eyes and heart tell him. And despite the fact that he likes to play it off as if he doesn’t believe in it, he has told me before that he sensed something or someone in that lodge.

At one point in time I believe it was called Tasso Lodge and and that he had found it abandoned up towards Alaska. To this day I still will not go in the lodge even if you paid me to.

Thank you for your time, and your patience. This story that I have relayed to you is accurate 100% and I can almost guarantee that if one was to go in this lodge as of today it would still be haunted. Whether or not you’re brave enough to step onto it is a whole different story to tell. The first steps onto this lodge into the cargo bay will set your hair on ends and make you sweat uncomfortably.”