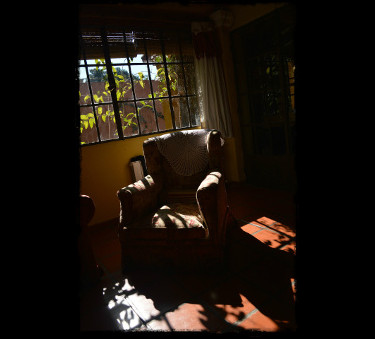 “3rd Avenue West main floor apartment when you first enter into the door on the left side of the house. Not the apartment in front, but the one directly behind it located at the bottom of the stairs when on the right.

When I first moved in, it was my one year old and myself living there. Everyone who visited me had experiences there and many were scared off. I knew someone who had previously lived there upstairs, but she no longer resided there when I moved in. My apartment had a door off the kitchen going to the basement which the landlord allowed me to use to hang laundry to dry on ropes.

Keys were flying off the key holders hitting my guests in the face while on their way into the washroom which was off one of the bedrooms. The lay out was kind of strange but I needed the space as I was expecting another child.

My boyfriend at the time all of a sudden took a swing with his fists in mid-air and swore something grabbed him around the neck. Nothing was visible but he said he felt it.

We later broke up so I took in a border who claimed she was often being touched or could hear voices. She moved out. Another moved in and she had experiences of being touched.

My clothes would mysteriously vanish and one time my jogging pants somehow ended up in the kitchen sink with water and soap which I discovered in the morning.

One time I came home to the fire trucks outside the house. There was a fire in my apartment and somehow a pot of spaghetti was able to get onto a burner, turned on, and caused the fire. No one was hurt but three other people witnessed me taking the left-over spaghetti and putting it away. So how did it get onto the stove and turned on by it self I will never know.

My toddler became deathly ill suddenly and nearly died while living there. Two miscarriages occurred to two different tenants in the house in the upstairs apartment. My son was in hospital for weeks with a mysterious illness nearly taking his life.

My daughter came to visit one weekend and she ended up on the living room chair. I found her there around 5:00 a.m., she claimed a man carried her to the chair. There was no man.

When my second child was born he screamed day and night. No doctors could figure out why. My friends who were Native brought their child over who was a seer. They told me if anything was in that apartment they would know by her actions. She cried all night in fear, they claimed she could see evil spirits.

The lights would always flicker on and off and the landlord would accuse me of always leaving the basement lights on when I had not even been in the basement. I wasn’t even home that day.

I got fed up with this place. There was a mail slot on my wooden front door where the mailman would shoot the mail in to me. In the middle of the night I would hear three knocks on my door around 3:00 a.m. and no one would answer when I called out to see who was there. Only the mail slot would move up as if someone where placing mail into it.

I decided to send both my boys to stay with their grandmothers for a bit. Both boys’ health improved, so I decided to leave there and move away.

Years later while on Facebook I came across the lady who I once met years earlier who lived in that house in the apartment directly above me before I moved in. I asked her did anything ever happen while she lived there. She said yes there was an old man who often would be standing at the foot of her bed when she woke up, and things were often moved around and out of place.

I believe that house tried to kill my babies because when the doctors examined them both babies were sick and anemic, almost to the point of heart failure and for no apparent reason. So we decided to have my daughter examined as well cause she had been visiting on weekends. And she too, the same thing — iron deficiency.”

“We moved into an apartment in North Bay on Worthington Street West. It was a building with a barber shop downstairs, an upstairs apartment and downstairs apartment. When we first looked at the apartment there were two doors with no handles, only locks. We asked the landlord what was in those rooms and he stated it was storage. We asked to see in the rooms and he never wanted to show us. As we had no other option we had to move in to that apartment.

There was always cold drafts of air coming from the 2 rooms from under the door. This seemed a little strange, but we just associated it with the building being old. Shortly after we moved in things started to happen.

A box of Kraft dinner went flying from on the counter to across the room hitting the wall on the other side. A couple of weeks later I went into the kitchen only to see the 26 ounce bottle of alcohol was parallel to the top of the fridge standing up floating in mid air. As soon as I saw it, the bottle fell to the floor and landed standing up as if someone had picked it up and put it down on the ground.

I also woke up with the front of my hair cut only on one side, and then a couple days later I woke up to have it both the same length….. I accused my boyfriend of trying to scare me and he swears to this day that he never did it…..

We would be woken up during the night by something running up the stairs to our apartment or running something through our metal vertical blinds.

The last straw was when we woke up to a party downstairs. We could hear people talking downstairs, the water was running, it sounded like there was a party which would not be unusual except for the fact that no one else was living there……. We were the only ones in the building when all this happened. The bottom apartment was vacant . At first we thought people had broken in downstairs and were using it as a party place but in the morning when I went to look outside there was not one foot print in the snow leading to the downstairs apartment. As soon as we were able to find another place to live we moved the heck out of there.”